Sir, I have the honour to report that at 0400 on 9th April 1940, when in position latitude 67-20 North, 9-40 East, off the Lofoten Islands, I brought two enemy ships to action. Prior to the action, RENOWN, in company with HARDY, HUNTER, HAVOC, HOTSPUR, HOSTILE, ICARUS, IVANHOE, IMPULSIVE, ESK, and GREYHOUND, was,at 2000 on 8th April in position 67-07 North, 10-57 East, steering 260 degrees speed 12knots. During the night 8th there had been a strong southwesterly gale with a rough sea. At 1800 the wind veered to the northwest and increased to full gale force, accompanied by snow squalls and a heavy sea. The barometer rose 22 m.b. from 99 m.b. in six hours. It had been intended to steer to the westward until midnight and then turn to the eastward, so as to be to the southward of Skomvoer Light at dawn. Owing to the high wind and heavy seas this plan had to be abandoned, as the destroyers in company were becoming unmanageable. To ease their situation course was altered to 310 degrees at 2207 and speed reduced to six knots.

At 0200 on 9th April the wind began to moderate slightly and veered to the north northwest. Snow and sleet squalls were frequent and in them visibility was only a few cables. Between squalls, visibility was extreme. The sky and horizon to the northeast were beginning to get light. At 0240 it was decided to turn to the eastward and course was altered to 130 degrees and speed increased to 10 knots. The destroyers in company forming in a single line ahead astern of RENOWN. At 0337 a large unknown ship was sighted in a gap between the squalls on the horizon, silhouetted against the light, on a bearing of 085 degrees (i.e. Red 45 degrees) at a distance of about ten miles. A second ship was thought to have been seen some distance astern of the first. The ships were steering approximately northwest. Both ships were lost sight of in a large squall on the horizon. Speed was increased to 15 knots and then to 20 knots and at 0350 course was altered to 310 degrees. At 0356, when the turn was nearly completed, the two ships were resighted coming out of the squall on a bearing of 035 degrees at a distance of about 9 miles, steering 300 degrees. After a short time they were identified was two enemy cruisers, and fire was opened at 0405 on the leading ship, later identified as a ship of the SCHARNHORST class and hereafter referred to as the SCHARNHORST. The second ship was identified as a 8 inch cruiser of the HIPPER class and is referred to hereafter as the HIPPER. Fire was opened at an estimated range of 18,000 yards; this was short: normal spotting rules were applied and a straddle obtained with the third double at a range of 18,600. The enemy thereupon altered away about 30 degrees and opened fire about three minutes after RENOWN, found the range with their third salvo and at about this time hit RENOWN right aft and through the fore lower mast. The hit aft, apart from wrecking the gunroom bathroom, Midshipmen's chest flat and chapel furniture and flooding the Admiral's, Captain's, and Officers' baggage stores (230 tons), did no harm. The hit on the foremast put most of the wireless aerials out of action, until others could be rigged. These were the only two hits sustained by RENOWN during the whole action, with the possible exception of a near miss from HIPPER abreast the mainmast.

As soon as the enemy turned away RENOWN altered towards, bring the enemy to about 40 degrees on the starboard bow, and speed was increased to about 26 knots (i.e. telegraphs were put at full speed). The action then became general, the enemy on a retired course with his A arcs just open and RENOWN chasing followed by the destroyers who, although at the extremity of their range, were all firing rapidly. Later, due to the heavy sea, they had to fall back and were detached to patrol West Fjord. The enemy started to take avoiding action, causing salvos to fall out for line so that the range was temporarily lost. At 0414 a hit was observed in the fore superstructure of SCHARNHORST and two minutes later a second hit, in the form of a quick rising column of smoke amidships, was also observed. The latter was not funnel or gun smoke as SCHARNHORST had stopped firing after the first hit. Two salvos later, although a salvo of three guns had fired, only one splash appeared. Previously splashes including overs had been clearly seen, and it can be assumed with confidence that a further hit or hits on SCHARNHORST had been obtained. The result of this and the previous hits was to make a reluctant enemy into a hurriedly retiring one, as SCHARNHORST turned directly away at high speed. The HIPPER meanwhile had been firing rapidly at RENOWN but without obtaining any hits. She had been engaged by the starboard 4.5 inch battery at a range of 18, 000 to 20,000 yards. At this range the fall of shot of these small 4.5 inch shell were only seen intermittently and the control officer adopted the tactics of firing blind ladders across the best obtainable rangefinder range.

During this and subsequent periods I took advantage of the agility of the modern fire control now fitted in RENOWN to alter course within small limits as necessary to prevent the enemy establishing hitting. As soon as the SCHARNHORST broke off the action and turned away, HIPPER started to draw across making smoke to try and screen her. The fire of the main armament was then shifted to HIPPER, who, after the first salvo, also turned abruptly and joined her consort in flight. She, however, swung occasionally to bring her A arcs to bear and fire a broadside. This finished the main part of the action, which lasted twenty minutes.The second phase then consisted of a chase directly to windward and into a heavy sea. This second phase lasted about 1 ½ hours, with fire only being possible intermittently as both the enemy and RENOWN were passing through squalls of sleet lasting from a few minutes to, in one case, twenty minutes. The HIPPER was engaged as opportunity offered at a gradually increasing range from about 22, 000 to 29, 000 yards. As soon as RENOWN turned into the sea at 26 knots after the first phase, heavy seas were taken over the forecastle and it became a practical impossibility to fight the armament. Speed was therefore reduced to 24 knots during the periods of engagement and increased when the enemy disappeared into squalls; the average speed during the period was about 25 knots. An attempt was made to increase speed to the maximum towards the end, but the ship began to strain badly and speed had to be reduced again. The fire at HIPPER during this second phase was ineffective, mainly due to the long range, the end on view and the dodging of the enemy, who altered course every time RENOWN fired, and also the fact that the only two foremost turrets were bearing. During part of this phase also the right gun of A turret was out of action due to a mechanical failure of the anti flash arrangements. At 0600 the enemy went into a prolonged squall at a range of 29, 000 yards. They reappeared at 0615 for a short period far ahead and out of range. Contact was then lost, and the enemy had disappeared by the time RENOWN finally drew clear out of the squalls about an hour later.

Great disappointment is felt that neither of the enemy was damaged sufficiently to stop him, as if this had happened there is little doubt that he would have been destroyed. I am confident, however, that SCHARNHORST, apart from her engines, was heavily hit. It was clear that her fire control was put out of action before she turned away as her whole armament stopped firing. After turning away and after quite a long period, her after turret came into action again in what appeared to be local control, as the triple salvoes fired were ragged and their positions inaccurate. During the chase, RENOWN passed a number of objects in the water distributed over quite a large area which looked like inflated lifebelts about two feet square. Their position was such as to have been thrown or blown overboard about the time hits were observed on SCHARNHORST. I am pleased to report that the bearing and behavior of the ship's company during the action were excellent. All were out to do their best with a cool determination to defeat the enemy and ensure a crushing victory. Had nature been kinder their hopes should have been realised. They are, however, looking forward to an early opportunity to complete their unfinished task. Although not hit appreciably by the enemy, considerable and extensive damage was done in RENOWN by the blast from the 15 inch turrets, including the blowing in of the fore hatch abaft the breakwater, which allowed the heavy seas breaking over the forecastle to find their way before. Much water also found its way into the turrets, whose blast bags were torn early in the action. The only casualty in RENOWN was my Navigating Officer, Lieutenant Commander Martin J. Evans, who was wounded in the left foot by a splinter of shell from a burst short on the water. Two toes had subsequently to be amputated. Although in considerable pain, he continued to con the ship during the action and showed commendable coolness.
A report on lessons learned is being forwarded separately.
I have the honour to be, Your obedient Servant (sgd) C.E.B. Simeon, Captain.
Publicado por Eriol en 0:23 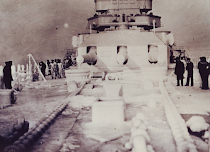 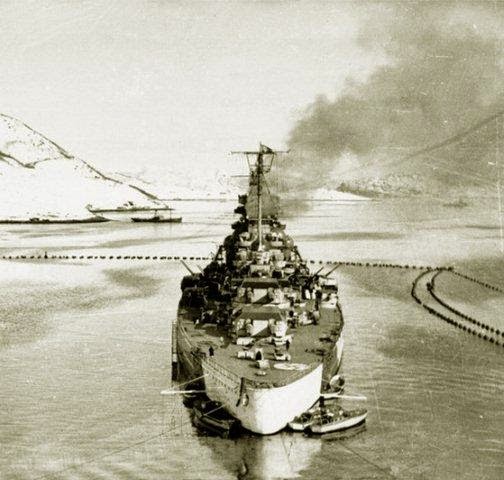 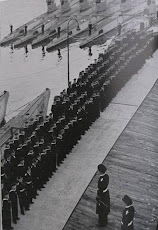 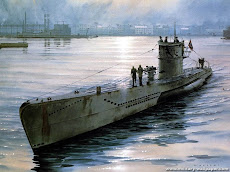 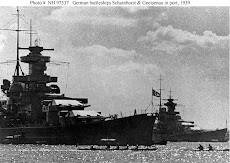 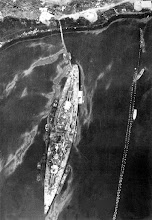 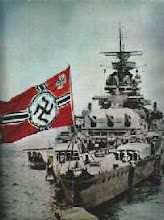